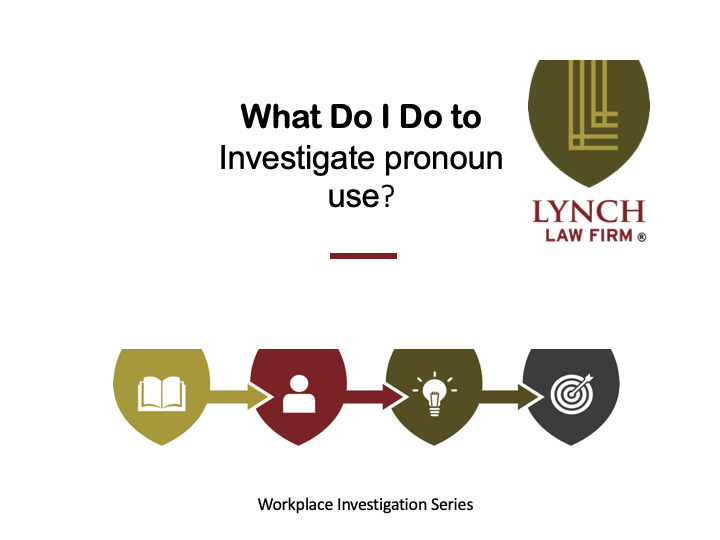 What do I do to investigate pronoun use during a workplace investigation?

What do you do if your investigation involves the use of different pronouns? I'm recording this video in July of 2021 and hoping that this is the video that ages the worst because we make so much societal progress here. As an investigator, I think the first thing you do is to make sure that you are educated on the terminology and concepts around people's desire to be called by specific pronouns. There's some good education for free out there to be had, so get it.

The other thing is partially conjectured on my part, but if we can't discriminate against gender, and we know that sexual attraction is an issue that the Supreme Court regards as a discrimination gender issue. We know under Title IX that gender identification is also considered discrimination under Title IX; I think we can safely assume that gender identification is also going to be a protected thing in the workplace.

So you investigate these claims, for sure. But if someone is talking in a way that doesn't make sense to you, you have to figure it out, or you're not going to understand what you're investigating, what the person's complaining about, or what a witness is trying to communicate to you. You need to say something like, "You've repeated that with emphasis," or, "You said that in a way that I'm not sure I'm appreciating. Can you explain to me the significance of that issue?" And maybe also encourage the person to "If you feel like I'm not getting why that's important to you, could you please stop me and explain why that issue is important to you so that I can follow along?"

And the other thing that you probably need to do is make sure that the person, who is not being called by their proper pronouns, has given others, either through the employer or through some system or they themselves directly, have equipped the people they're complaining about to be able to call them by their proper pronouns. Probably they did before you got there. But it would be best if you verified that. But we can likely conclusively determine that our Supreme Court will expressly protect the use of appropriate pronouns at some date in the future. And so we should be investigating those allegations.