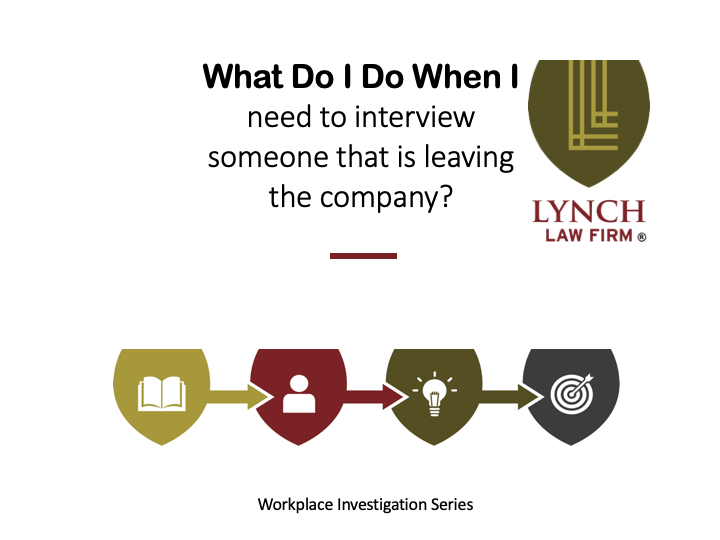 What do I do if someone is leaving their employer during a workplace investigation?

What do you do if someone is quitting or already quit and you really need them to be part of your investigation? The first thing you do is find out your client's protocol in this situation. For example, many government entities will not engage former employees in most workplace investigations. There can always be some... If there's a crime involved, that would be a different situation. But for example, most public employers won't do that. Most private employers will ask people. But clients fall on all sides of that. And so you need to find out what their policy is and to act consistently about that. But if somebody is about to quit, the thing that might happen it is a, you need to check their bias because they are likely often leaving. After all, they no longer have feelings of affection towards their current employer. They're leaving because they don't want to be there anymore. And so they're going to be overly pessimistic in many cases. Some people are emotionally mature enough to be neutral and unbiased with you and fairly report things.

And you just kind of have to gauge the reasons they're leaving and their demeanor to be able to determine that. But the other thing that can come up is that now you have someone who is eminently leaving, and you're not going to get to their investigation until after the date they're gone. And so you'll often interview that person before you otherwise naturally would. So I've had a good handful of situations where I've had to interview an eminently quitting person before I even questioned the reporting party, which is just backward because I don't even know what I'm investigating yet.

But with some skill and thoughtfulness, you do the best job possible. And it's always nice to ask, "Hey, if I had one or two more questions, would you mind if I called you later?" As you know, I'm doing this in an awkward order because of your plans. And I guess the same thing if they're going on vacation, leaving the country if they're about to have a baby, things like that. If we know that they're imminently leaving, sometimes we have to interview them out of order and do the best we can. And then explain in our report why we did things that way.