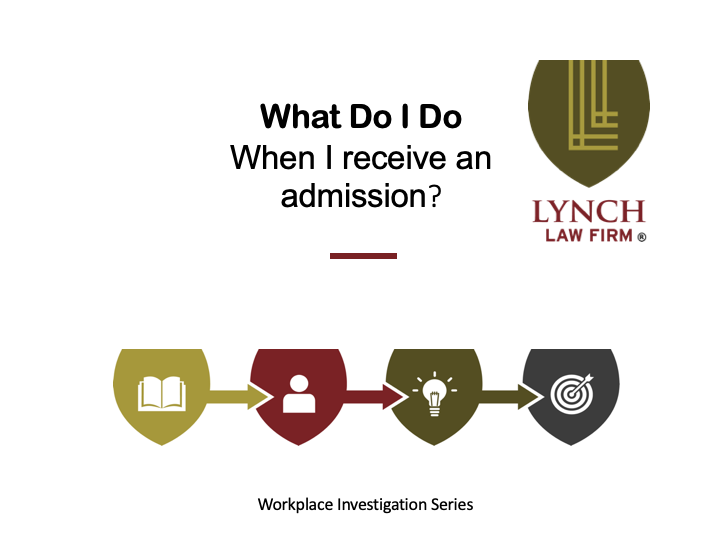 What do I do if I receive an admission during a workplace investigation?

What do you do if you receive an admission? Suppose you're going into an accused interview and you have reason to suspect that you're going to receive an admission and it's about something that is, or the concrete, or rather likely to go to litigation. In that case, you might want to paper up your admission for your client and for their legal process or even their negotiating process with that person. If I go into an interview knowing that I might have an admission, I might walk in with a great form, and the form might say things like my name is blank. I am recording this of my own free will and then have lots of blank lines and a signature placed at the bottom. But if an admission comes out of the left field, because you thought you were interviewing a witness and it turns out it was the bad actor, or because you just really didn't expect that person would be making an admission, we can quickly throw something together.

And so generally, we want to record the date and time that something was admitted to, and I'm usually coaching the person through this. And so we need to record their name. We got to record that the admission is of their free will and then the details. And then, at the bottom, we got to get a signature. And the details are often something that I, as the investigator and feed to the person making the admission and making the written admission because they are often probably nervous or not really in a frame of mind to be comprehending what is vital to your sort of case on this issue or what is essential in the surrounding environment about what's going on? So, you might need to be feeding them details. You told me that you did this thing at three o'clock, that you did it again at four o'clock, and that again at seven o'clock.

Can you record those times for me and the details of what you're writing? You told me you did the thing while wearing a blue shirt, sneakers, and shorts. Could you record that in what you're writing? And so I often have to feed the person the details of the admission I'm receiving. And again, you want to get that signature at the bottom, and you want to get the person's name. In some workplaces, in some states, you may have an obligation to provide that person a copy of what they wrote, and you just need to be aware of what the rules are for you in that environment. If you do receive admission and convert it to a written admission.