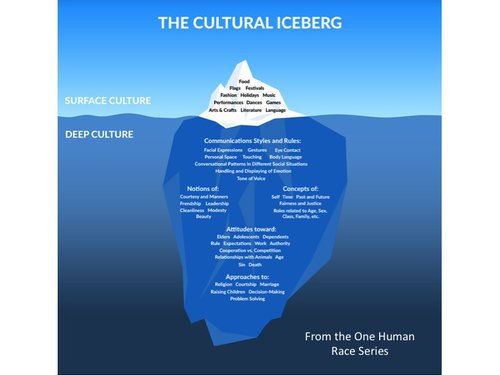 In today's global marketplace, understanding cultural dynamics is more important than ever. Having a good understanding of cultural influences can help employers and human resources managers avoid taking adverse action against individuals based on cultural misunderstandings.

Icebergs peak over the water, revealing just a small portion of their total mass. Culture is similar in that people at first just see a small portion of a person's culture based on things such as clothing, appearance, speech, grooming, greeting rituals, music, arts, or dances. However, these observations comprise just a fraction of a person's culture. Just like with a physical iceberg, a cultural iceberg contains essential characteristics beneath the surface.

Under the water line of the cultural iceberg are many important components of culture. This includes the ideas, preferences and priorities that comprise individual attitudes and values. A culture's core values include its understanding of what is wrong and right and good and bad. Additionally, this is what individuals in the culture have learned about what is acceptable and unacceptable behavior in society. Core values teach children and adults about the importance and manifestation of honesty, respect, and integrity. However, there may be different situations in which these values may be asserted or interpreted in a different way.

Buried further in the cultural iceberg is the interpretation of core values. These behaviors may be better understood and interpreted when individuals who are part of the culture conduct observable behaviors, such as which words people use to talk, the tone of voice they use, the laws that are passed, the mannerisms they use when interacting with others, and the ways that they communicate with others. Other people interpret cove values by observing how individuals behave in their professional lives.

While people may grow up with teachings regarding core values, these values may change over time. New experiences and shifts in cultural views may shape a person's core values. However, these changes often do not occur quickly or without complication. Many core values become part of the culture's external image to others. They are often passed on from one generation to the next and continue to influence individuals who are part of the culture. The core values may guide, teach and influence individuals. In addition to the teachings that individuals receive from their parents and what they are taught in an educational setting, other cultural influences include the media and the laws that are passed. These factors influence social norms and shape a person’s ideas about how they see the world and what they decide matters to them.

Individuals may be able to see and describe certain aspects of culture by simple observation. However, they can develop a better understanding of deeply rooted ideas by studying formative factors, reflecting on their own core values and analyzing observed core values of members of the culture. Simultaneously, they can be open to the idea that individual values may differ.

A global pandemic, a fragile economy, political and social unrest; these are tough times for leaders and those who work ...
Learn More

Honoring all those who served.
Learn More